caro<3 peers through the prism of love
Mike GiegerichJan 5, 2022 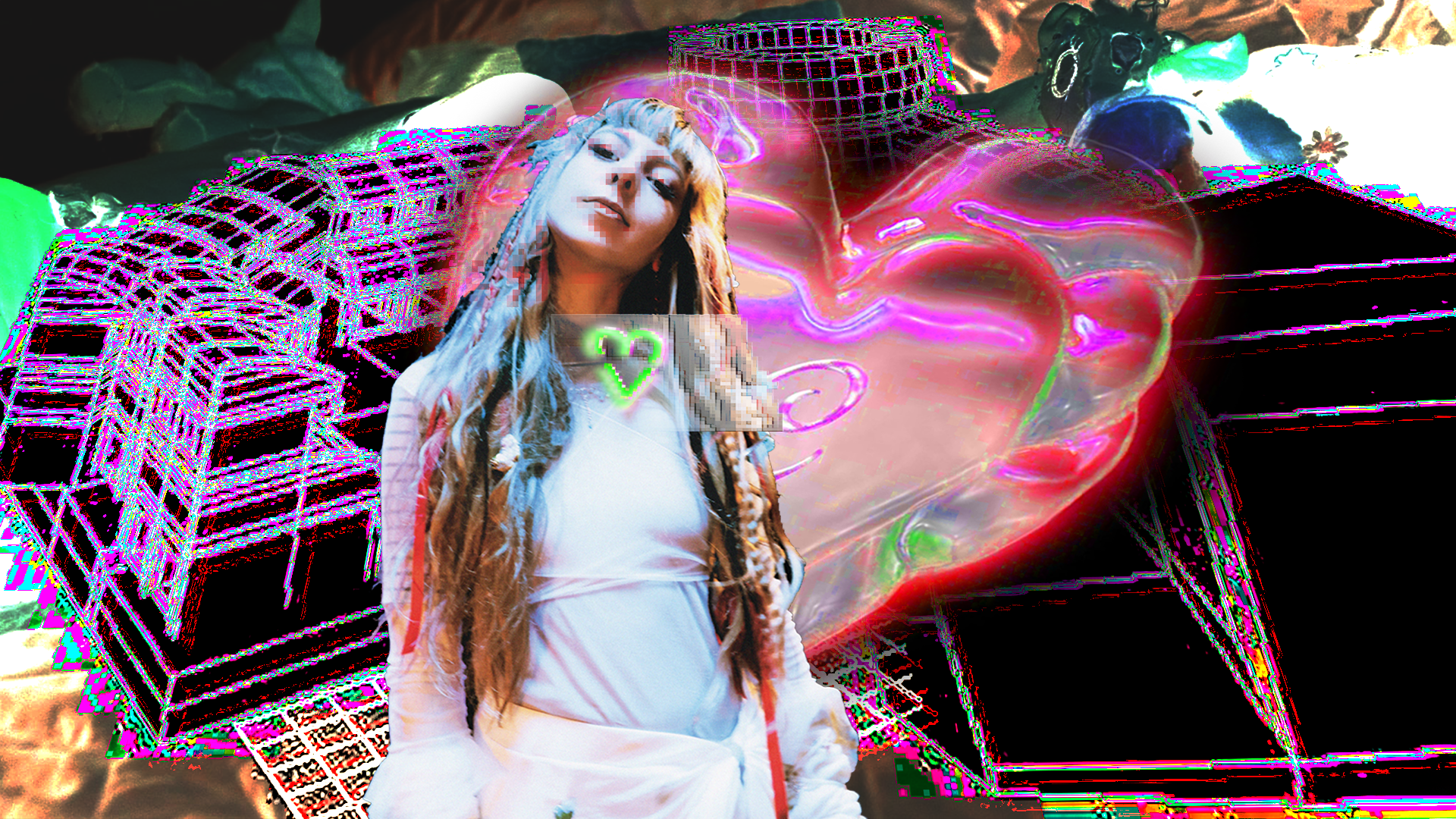 At the end of her name sits caro<3’s heart. Once heavily guarded, she now opens herself up to the possibilities of love by wearing her heart on her sleeve, in her name, and across her lyrics. Through her openness she connects with humanity, a higher power, and herself, but actualizing love doesn’t always come naturally. By overcoming the entrenched fears of an artist, discovering strength through the tangible bonds of community, and leaning into the mystical inclinations of music, caro<3 redefines what it means to experience love in its essence.

Raised on the coast of France where her musical talents began to take shape, caro<3 eventually landed in Paris and met her bandmates in the future-pop outfit Planet 1999. After cutting her teeth in the Parisian scene, she relocated with bandmate Charles Teiller to London as she recalls, “I really didn’t feel like I belonged in Paris. I wasn’t happy at all, so I really needed a change of scenery … In Paris, it was really hard for us to find a music scene.” While moving to London, caro<3 and Planet 1999 contacted PC Music head A.G. Cook, who subsequently signed the outfit and welcomed the band into the label’s devoted ecosystem. PC Music is an environment that’s historically given artists freedom to experiment and comes with a built-in fan base that ascends into a fervor around the label’s associated acts. Dedicated Discord servers and Instagram meme accounts inflate like neon-pink bubblegum, making space for acts like Planet 1999 and caro<3 to pop.

As buzz built around Planet 1999 and she soaked in the culture of PC Music, caro<3 was quietly in the process of making solo demos with no expectations, following a purely natural flow. This process sparked “over u,” an aching, luminescent composition that floated into existence three years ago during her arrival in London. As the world entered a lockdown in the subsequent months, she continued to create, producing demos every few weeks. These lockdown demos would eventually lead to the gestation of her debut solo album: Heartbeats/Heartbreaks.

The project’s title might lend itself to exclusive intonations of romance, but it’s more so grounded in platonic ideals of emotional vulnerability and the pain it’s prone to welcome. caro<3 grapples with accessing this unflinching honesty as she reflects, “I think I tend to work hard to hide the vulnerable side of me in my everyday life. I grew up thinking I should put this strong person mask on, but I try to share more of my own struggles now.” Her expansive body of work is characterized by emotional sincerity, but this kind of songwriting isn’t always a conscious decision. “Music is also sort of magical in the sense that I don't think it is rational,” she says. “It reveals feelings that are really true and genuine, and that I don’t quite know how to reach otherwise.”

Finding this expression through music was a process in its own right as she reflects, “It’s hard, it took me years, because I feel it’s scary to release music. For years I was really afraid of it, you know you’re always scared people are gonna make fun of you or … even right before I pressed send to send the album to A.G. [Cook], I was still insecure thinking maybe I went completely crazy and this is like, a load of crap.” Her perspective has since evolved into the realm of positivity as she affirms, “It can be really hard to find the courage, but once you find it you realize it’s not that big of a deal. Life is really short and it really doesn’t matter. Whatever you do, it doesn’t matter, you should do it.” It’s an inspiring sentiment, one that should resonate with artists questioning their capacity for candid creation as the butting heads of authentic output and playlist compatibility collide.

Heartbeats/Heartbreaks is a particular turning point in caro<3’s journey to acceptance as she opens up to the possibilities of camaraderie and communal love. She reflects, “Getting over myself and making this has really changed my life because it has literally opened me up to people. Making music, making art, and sharing your stuff is such an amazing way to connect … It really gave me a sense of belonging somewhere.” She describes her relationship with the artistic community as “precious” and “supernatural” adding, “I wish we would see more of it in the world, ‘cause I think like many other things it depends on a snowball effect kind of thing. The more people pour into it, the more it grows, it gets passed along and it inspires others to do the same. Because yes, I think love is inspiration too. I feel like in the past few years I’ve met a lot of people that I actually received a lot of love from and that I love as well, and that completely changed my life.” As caro<3 and those in her life make space for one another, a field of love radiates outward, whether it manifests as physical auras in her home of London or the digital pathways of internet friends across the world.

Now tuned into these genuine connections and an unshakeable commitment to speaking her truth, caro<3 brings a singular voice to Heartbeats/Heartbreaks as her songs elegantly ebb and flow through an intricate survey of love. Whether it’s the sweet instrumental ambiance of “moonrise” or sugary echoes of “4U,” her passion for defining passion is the album’s beating heart. She’s thoughtful and precise when approaching the topic as she offers observations that would fit snugly within academic and esoteric appraisals alike. “Love is the most beautiful feeling, [whether] it’s romantic or not. I think part of it is selfless and also it’s beyond everything else, it’s beyond anything materialistic … it’s almost spiritual to me, you know? When we talk about God or whatever, love is that for me,” she says, imagining a higher power as the pinnacle of the human condition.

caro<3 extends this elegant train of thought and adds, “Sometimes when I feel really good psychologically — at peace with everything — I have these moments of lucidity where I can really feel an infinite stream of love inside of me. It sounds weird [laughs] but you know, sometimes you realize and you’re like, ‘Oh my God, you can love anything, you can love anyone.’ Everything is just a question of perception, and when I somehow end up in that place where I can look at the world around me through the sheer prism of love, everything makes perfect sense and there are no questions anymore. No regrets, no fears.”

On tracks like “sad song 77,” caro<3 glides from heartbeats to heartbreak and examines the results of emotional fractures. When asked how she contends with sadness, whether it’s through music or a different pathway, she reveals with a laugh, “I have another outlet, I do boxing [laughs], boxing is really good [laughs].” She admits that approaching sadness through music is sizably more difficult, as she lives and breathes these emotions in order to accurately document them. “I’ve realized that I get inspired by some emotions and that sometimes in my life I’m going to kind of try to amplify these emotions so I get inspired. It can get borderline unhealthy,” she explains. “It’s so cool to feel these things and I know I’m gonna be able to write songs about them, but then sometimes I do feel a little bit disconnected from reality, you know?” As she dives further and further inwards, she’s found that art and emotions coil into one another until they seem inseparable. “I do therapy and talk to my therapist and she always tells me, ‘It’s so cool that you do music, but remember, it doesn’t define you,’” she reveals. “I feel like it’s hard because I really think that it’s my most honest form of expression in respect to how I feel and who I am.”

Though this sentiment of losing herself within the creative process seems daunting, it’s been thwarted by plenty of joy. caro<3 recently performed at Pitchfork Music Fest London and experienced the love she explores in the studio. She remarks that, “PC fans are the cutest. It was the first time in my life where people were so excited and some people knew the lyrics and knew the songs and that gave me so much confidence … I received so much energy from the people that I felt like I was in the right place being on stage.” She’s also happily experimenting with a series called the lost logic files, the first edition of which was a Bandcamp-exclusive compilation of demos to complement Heartbeats/Heartbreaks. She peers into the future of the albums and reveals, “I feel more confident — in general and with the music — that’s why I want to put out some more volumes of the lost logic files. I have all these little demos that I like and I think it’s interesting to show more of it if some people want to listen.”

As caro<3 discovers boundless love and harnesses her acquired aptness for emotional transparency, forthcoming projects like the next iteration of the lost logic files will only benefit from the mind of an artist who is tremendously self-aware. Steeped in universal consciousness, she’s tuned into a complex vision of love and vulnerability for her future. 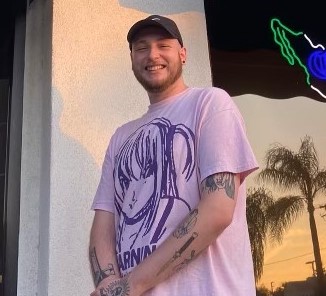 Mike Giegerich is a Los Angeles-based writer who earned his stripes as a teenager in the metal scene. He has since branched out towards new genres in perpetuity over the last decade, and is a long-term Björk advocate who firmly believes she can do no wrong.